When Jasmine arrived on her first day to BIG IDEA’s israeli summer camp, she was a little alone at first. When she was put in the room with Lia, she didn’t know that they were going to be that close.

Jasmine Osri from Israel and Lia Folkman from Belgium met two years ago at BIG IDEA’s summer camp  and today they’re best friends. In the summer camp, you get to know people from all over the world in a free and safe environment where campers make new connections, discover their strengths and manage to stand out in what they love most.

Lia and Jasmine met Israel at camp and already on the first day they connected “First day I was alone” Jasmine says “Then Lia came and we started talking, we were talking until 5 am”, “It was every single night” adds Lia. In camp it is easy to connect with people and meet new people in every workshop and in each activity more campers join and some of them you haven’t met before. But the best part was at a pool party “We joined Nevo and Gabay who were sitting alone at the party and since then we have become really good best friends.” 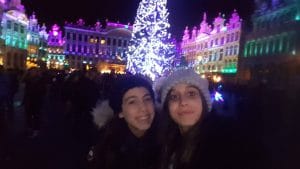 After the camp in Israel, Lia suggested that Jasmine come to visit her in Belgium, Jasmine told her there was no chance her mother would agree but she would ask anyway. The next day, at 4 AM, Jasmine’s mother called her and told her “You have a plane ticket to Belgium!” The excitement was at its peak and four months after they met. “When I saw her, I immediately jumped on her! And I was super happy.” From the pictures they posted on their social media we see all the joy and Christmas atmosphere in the background “We ate a lot of chocolate”, Lia says, and Jasmine immediately completes her “the best chocolate” that sounds like real Belgian chocolate. 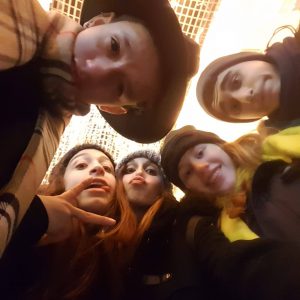 The whole group joined that trip and they hiked the Atomium and from there they went shopping and more trips. Today, the whole group maintains a close relationship. “We’re talking on FaceTime and keeping touch often.” Jasmine says that finding such a relationship is not a simple thing, “try hard, because it will pay off and that is how you can find your best friend.”

Do you also want to know friends from all over the world?

Ask us anything.
Fill the form and we will contact you as soon as possible